What could you do over the Christmas holidays?   You could do any of the following things:

At breaks we try to ensure everyone’s safety and happiness. If anyone worries about playtime we try to sort it out in the best ways we can. We make sure everyone has someone to play with or has something to do during break. There are many more things to do (e.g. drawing, colouring, timber trail and ping pong. The duty bearers take care of anything that happens at break time and lunch play.

Netball Club Update We interviewed Emily Chapple about the changes in the netball training. She said that she likes doing it and that everyone gets a go during training. This afterschool activity makes people more confident and active. If you join netball no one expects you to push yourself over your limit. We try to help you be the best you can be. Miss Morris is the netball coach and teaches children to improve their netball skills

We interviewed Katelyn and asked her a few questions. She said she really enjoyed it and would like to do it again. Her favourite part of the club was to throw the counter at the target. They did a little tournament between the 2 teams, red team and blue team. The overall winners were the blue team with 5 points to 4.

Netball at West Tytherley On Thursday 11th November we had a friendly tournament between the two schools and the children had a brilliant time. The netball games were very competitive but everyone had excellent attitudes. We played some matches as schools and some matches mixed up. The children reported that they loved it! They are looking forward to hosting West Tytherley in the future!

Football Tournament at Wallop On Wednesday 24th November, 9 children went to Wallop Primary school to participate in a Test Valley cluster school football tournament held by Lions in Community. The teams we competed against were: Wallop Primary, Stockbridge Primary, Broughton Primary, West Tytherley and Wherwell Primary. We each played four matches and a break. Our results were, we drew 1-1 against West Tytherley, won 4-3 against Stockbridge, won 4-0 against Wallop and lastly lost in our final game against Wherwell 4-2. Our year 5/6 team were Billy G, Ethan E, Phoebe E, Emily C, Dylan C, Jacob F, William H, James P and Scarlett T (who kindly played for West Tytherley). At the end of the competition, the results were announced, with 5th place awarded to Wallop, 4th place awarded to West Tytherley and then it came to the top three. As we drew points with Stockbridge, it came down to goal difference were Stockbridge beat us, which meant that we were awarded 3rd place with Stockbridge in second and Wherwell in 1st place. Although we all thoroughly relished in the four matches and were very happy with our place. By Emily C and William H.

Girls Football at Wallop On Wednesday 17th November, a group of nine girls from year 5/6 had an exciting trip to Wallop Primary School involving practising football skills and finishing with three separate matches (friendlies). Our efforts were overseen by the students of Andover College and their coach. We participated in a variety of fun training sessions invoking learning midfield, defence and attack skills. We were sorted into six groups of seven with other schools. It was fun socialising with the other children and getting to know them. As the top of the school, we represented Broughton whilst playing a very enjoyable game. Undeniably, every single girl relished the game and played their hardest. The main objective of this festival was to encourage football throughout schools. West Tytherley, Wallop, Lockerley, Wherwell, Stockbridge and Broughton all really enjoyed it. Thank you Mrs O’Callaghan and Mrs Zipfell for helping transport the girls and Mrs Devereux for organising a fun event.

On Tuesday the 5th of October, a few people from each year group got the opportunity to participate in this year’s Cluster Cross Country. The event was located at Wallop Primary School, and lots of other schools came, including West Tytherley, Stockbridge, Wherwell, Lockerley and Wallop.

Some very brave runners joined the Federation of West Tytherley and Broughton team, and did brilliantly.

After everyone had ran – and did a fantastic job – the scores were announced. In 6th was Stockbridge, 5th was the Federation of West Tytherley and Broughton, in joint 3rd was Wallop and Lockerley and in 2nd was Wherwell. That meaning we came 1st! Broughton, once again brought home the cross country shield!

Well done to everyone who participated in the Cluster Cross Country for Broughton and the Federation team. 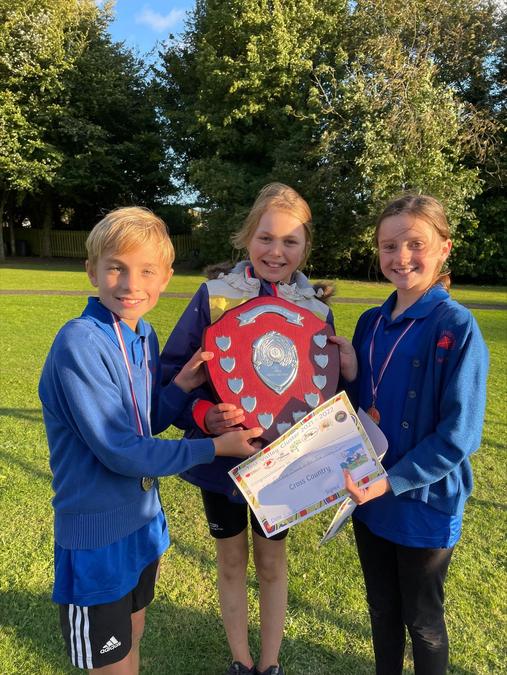 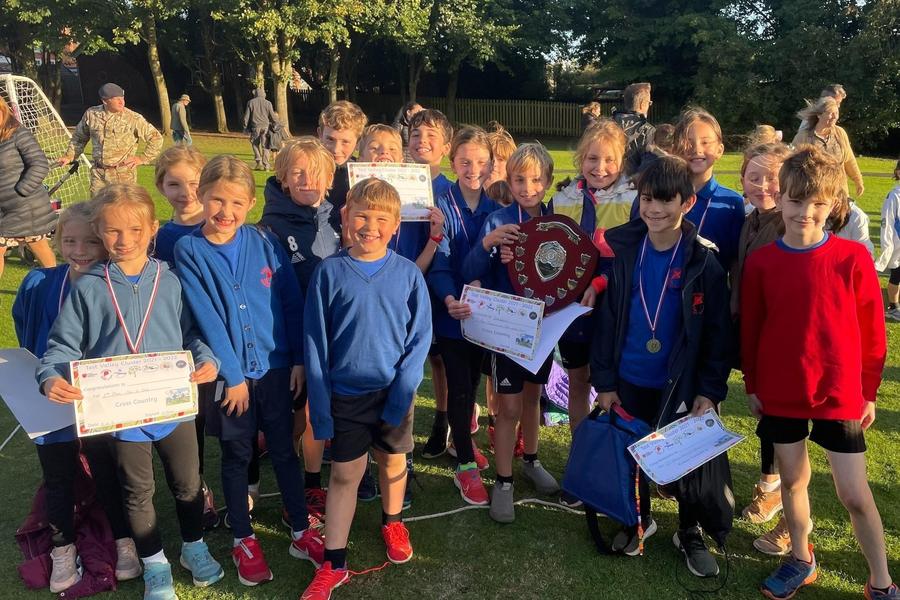 Miss Lee accompanied a small group of children from Foxes to Wallop school to learn all about Tag Rugby ready for our competition later in the year.

The children really enjoyed the session and picked up lots of new and exciting skills.

The children enjoyed taking part in lots of different activities, including gymnastics with hoops and ribbons,  creating different jumps and making shapes. They also had been practising a routine to perform at the festival which was judged. I was very proud of the team and I know that everyone we took enjoyed the opportunity to do something different.

On Monday 6th January we held a cluster staff training session which was run by Cathy Devereux from Lions in the Community. Mrs Macey, Miss Lee, Miss Ayers, Miss Morris and Mrs Hudgell took part in this fantastic chance to learn about the progression of skills from EYFS through to Year 6. We were also joined by teacher from Wherwell and West Tytherly. Mrs Devereux went through lots of exciting games, important techniques and gave us some fantastic ideas. We look forward to sharing this with you in your next gymnastics unit!

On Tuesday 3rd December we took a group of year 5/6 children (Jack, Jake, Tommy, George, Henry A, Henry P, Camilla and Esmay) to a cluster completion against 6 other teams. Our first match was against Lockerly and we beat them 1-0, Jake scored! The next match was Wherwell which we were very nervous about. We drew 1-1. We next played the hosts Wallop again we drew 0-0. Next it was a break where we enjoyed warm hot chocolate (Thank you Mrs Green!) and chocolate rolls (Thank you Jack). We had a small pep talk from Miss Morris as we realised we needed to dig deep to win! The team came back strong and beat West Tytherly 7-0. It was the highest score of the tournament! Finally we played King Somborne and beat them 4-0.  We were all very excited and exhausted! Mrs Devereux announced the scores and we had won! We all got gold medals which was great! Thank you Lions in the Community!  Written by Jack, Jake and Tommy

On Monday 11th November Broughton took 4 children from year 3/4 to Test Valley Secondary school for a competition. Our first match was against Lockerly who had very snazzy hoodies! At first we were very nervous because we didn't know how good they were, but as soon as we started playing our nerves soon went. Our second match was against Wherwell. It was a very close round! We played against 6 schools all together. All the schools gathered together to announce first, second and third place. The bottom three got a certificate and the top 3 got medals. Wherwell came third (we thought they were going to win). In second place was Stockbridge, they played really well and first place was...... Broughton! All of the team got a gold medal with Kurling equipment on. We were very proud to come home with a gold medal!! 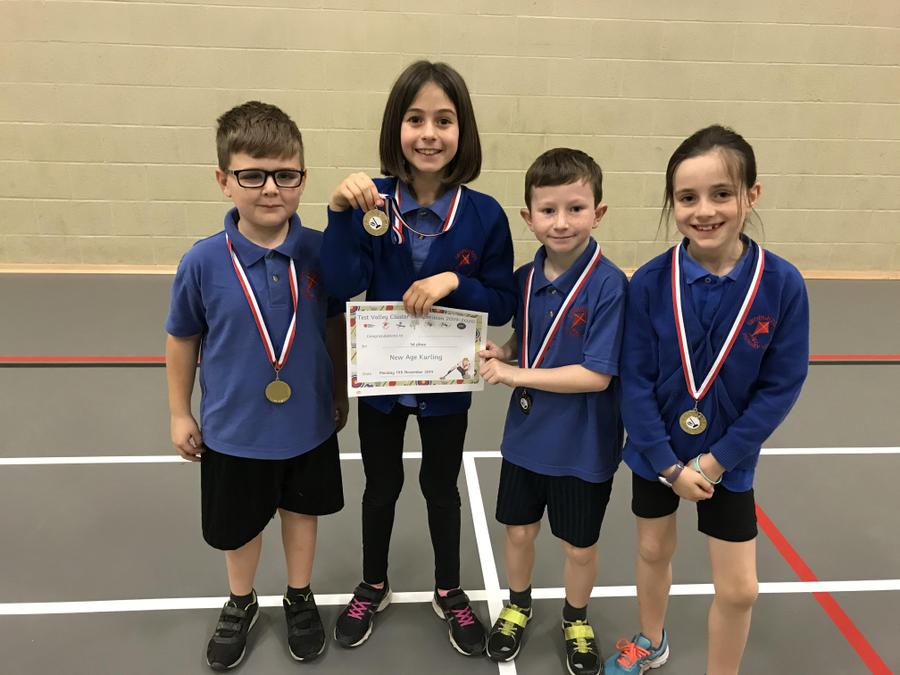 A new and exciting set of Kurling equipment has arrived at school this week! This new sport has been enjoyed by lots of children through our New Age Kurling club on a Tuesday evening and in golden time.

Kurling is a form of the original curling, but adapted so that it can be played indoors on any smooth, flat surface.

Unfortunately not the ones with chocolate chips.

Some cookies are necessary in order to make this website function correctly. These are set by default and whilst you can block or delete them by changing your browser settings, some functionality such as being able to log in to the website will not work if you do this. The necessary cookies set on this website are as follows:

Cookies that are not necessary to make the website work, but which enable additional functionality, can also be set. By default these cookies are disabled, but you can choose to enable them below: